The management of Achievers University, Owo, has confirmed the death of the institution’s Vice-Chancellor, Prof Samuel Aje.

It was gathered that the late vice-chancellor who assumed duty as the head of the institution in June 2020, died on Thursday, December 29. 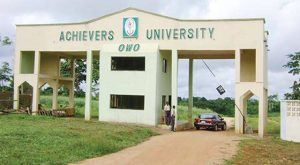 The university’s Head of Media and Protocols, Mr. Adebayo Olagunju, who confirmed the incident said the VC’s death came as a rude shock to the entire university community. He added that the deceased family would issue further details on the incident.

A senior lecturer in the school who spoke anonymously also said that the death of the vice-chancellor was shocking and devastating because he had no sign of sickness before the Christmas break.